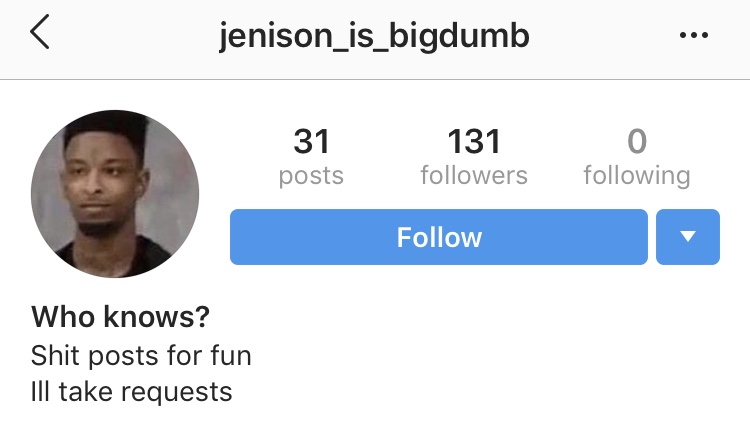 On February 5th, 2019, a student created an Instagram account targeting students at Jenison High School to make insensitive comments about them.

This account, named @jenison_is_bigdumb gained over 175 followers by the 6th day of its existence. Many students felt disgusted by the comments made on this account, while others found it funny. John Smith, who @jenison_is_bigdumb posted about, said that if they were to tell the creator of this account something, they would tell them to “make better jokes.” Others, such as Sam Johnson, said they were not too annoyed about the account because of the way they “know guys talk to other guys,” but when they saw girls posted about, they decided it was not right.

The reason behind the creation of this account is still unknown. However, the effect this account has had on students is clear. Some students laugh it off and see it as a “meme page,” while others feel disappointed and annoyed by the comments and posts made by the account. Captions on posts include using racial slurs, homophobic slurs, and comments that are along the line of sexual harassment.

After the posts on their first day, the account didn’t post until 5 days later. On February 10th, following many more posts, multiple anonymous sources reported the account to both Instagram and Jenison High School administration.

Captions from this day include calling a student a “dumb feminist,” saying another student “looks like a monkey and belongs in a zoo,” and refusing to make any comment on two students while saying “stoners stick together.”

During this time, between February 10th and 11th, multiple posts were made of multiple students. Some students commented on posts telling the owner of the account to stop hiding behind a screen and making unkind comments about students. Others, however, posted about this account on their personal social medias to promote the posts about themselves.

Since the first day of activity on this account, the profile picture was set to a picture of Mr. Brown, a math teacher at Jenison High School, sitting at his desk. It changed a couple more times before the account went inactive.

On February 11th, the last day of activity for @jenison_is_bigdumb, the account was up to 31 posts and 131 followers, with a bio letting visitors know they will “take requests.”

Shortly after school was out of session for the day on February 11th, the account posted their final two posts.

“How can someone be so disrespectful and childish to others and judge them for things that they [can’t] change?””

Their final post, which came shorter after the one mentioned in the previous sentence, had a caption say they will “be done” and “[it has] been a pleasure” with a smiley face.

Wildcat Roar holds limited information as to what is and what will be the outcome of this situation, but as expected, the student who created this account since received suspension. Alternative education is still in question, but there should be news on the matter by the beginning of the 2019-2020 school year.