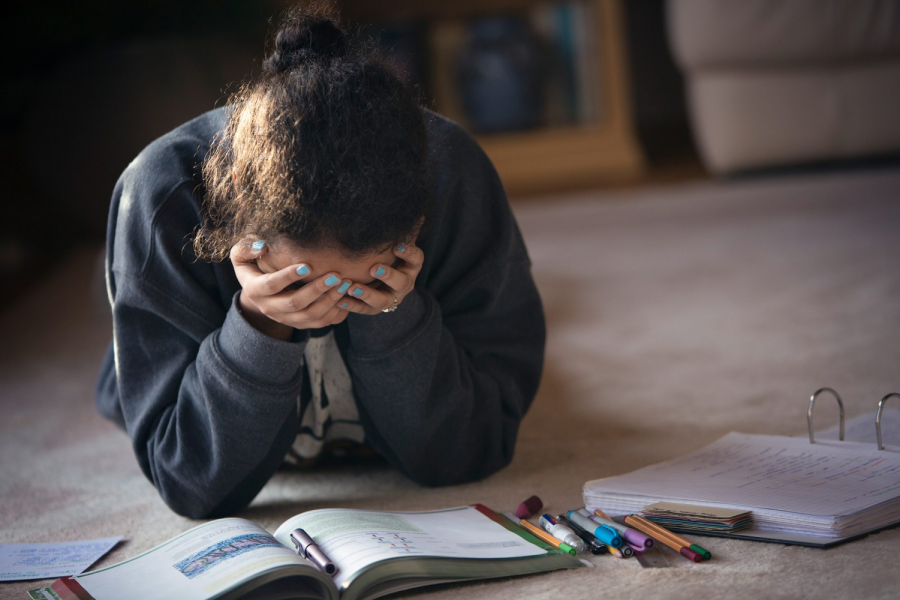 Early mornings are the worst. The feeling of waking up to a noisy alarm just to do the same work over again. The sleepiness haunts you throughout the day just trying to make it by, but of course, right when you think the day is over, homework caves in building back up all the stress you had from yesterday. And the cycle continues.

Teenagers show a difference in behavior compared to younger kids, or adults. They tend to have a higher stress and anxiety level along with becoming way more tired. It tends to circle around education and the main causes come from issues that relate to school. This cycle continues everyday as students become loaded with more and more homework as the school year continues.

What is important about these students is to figure out what causes these patterns in students. Teenagers grow and will always face challenges like these. Their bodies make a change in sleeping schedules, they need extra hours of sleep, and have no time in the day to get enough rest.
Causes
Once kids enter their older teen years they tend to become more sleepy. This is due to a biologic shift in their circadian / body clock. This means that their natural sleep period shifts later. That also means their bodies want to go to bed and sleep in later than normal. Since schools start early and follow with sports, work, or homework, kids do not get a chance to gain enough rest.

Dr. Carskadon states, ”They’re being asked to be in school when their brain essentially is still asleep, so it’s not surprising they sleep through the first and second period,” Dr. Carskadon said in a phone interview.

Typical teenage brains do not even wake up until around 8:30 am. Making them wake up around 5:30 – 6:30 affects their mental health and causing them to be more sleepy. It makes it harder for them to even function on a day to day basis and do work causing them to fall asleep during classes. Once they start falling asleep they do not learn much and it causes their grades to go down. It becomes an endless cycle. Dr. Maher of Briarcliff said that despite all the immutable features of the current school schedule, he believes that the issue merits examination. ”I think there needs to be a consideration of a later start time despite some of these issues which dictate an early start, because you really do need to think of what our mission is, and of course it’s academic,” he said.

If students were able to get more sleep, they would be able to get more work done and not fall asleep in class. This would also improve grades. Mental health is important for all younger kids and teenagers, even young adults. University of Minnesota scientists studied Minneapolis students and noticed that students had fewer depressive signs than those that start earlier. Attendance improved as well. If changes were made in schedule times, students would improve and set a positive example towards education.

Kyla Wahlstrom of the Center for Applied Research and Educational Improvement at the University of Minnesota in an analysis of the schedule change. “Having a later start for the first hour of class appears to enable more students to not oversleep and to arrive at school on time.”

Lack of sleep has causes of multiple different sleeping disorders that people develop throughout the years. Excessive sleepiness is an issue in most teenagers and causes depression, lack of school performance, and increased risks of car accidents. Car accidents happen to be the number one cause in deaths of teenagers. A small change in the start time of school can prevent them.

Craig, Canapari, MD ¨Disorders of increased sleep drive. These are disorders which result in increased sleep drive. The most common disorder of increased sleep drive is narcolepsy, and it is still quite rare. Narcolepsy is rare but usually appears during the teenage years.¨
Conclusion
Not many people realize how important sleep is for teenagers or any young adult. They do many tasks on a daily basis that can drain them. Without the right amount of rest, this can lead to serious problems and outcomes. Starting with sleeping in class all the way to deadly or harsh car crashes.

Behavioral issues in teens is common and can be fixable with effort from people in their communities. The ability to fix these small issues is easy. Small changes in everyday tasks can improve rest and sleepiness in young adults. It can also relieve stress and show less depressive signs. Many are hopeful for change so students and children can do and be better in mental and physical ways.