It could be a phony situation

“43 percent of Americans who own a smartphone believe their phone is recording conversations without their permission.”

Imagine your friend talks to you about the movie you plan to go see this weekend and then all of a sudden, ads start popping up for Celebration Cinema on your social media accounts. Some of us have had this experience before. We brush it off, saying it is just a coincidence…until it happens again. After this, we can’t help but ask ourselves: is it a coincidence after all?

According to data from PewResearch.com, “81% of Americans own a smartphone”, and depend on it to remember events for them, entertain them, direct them places and so much more. Because of this need, we bring our phones with us everywhere, as we rely on them for our day-to-day lives. Even though we rely on our phones for so much, we don’t understand them. We click accept without understanding the terms or the consequences. We need to start asking ourselves: What did I just allow my phone to do? 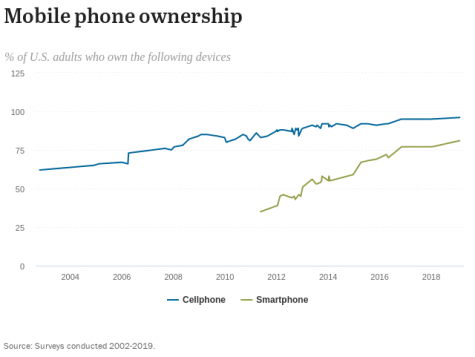 People began to wonder if their phone listens to them, without knowing for sure. A Consumer Reports study found that “43 percent of Americans who own a smartphone believe their phone is recording conversations without their permission.” Some companies, like Facebook, have told the world “We do not access the microphone just because the app is opened nor do we use it when you’re not in the app.” That leads us to wonder, is it a coincidence that ads pop up for items we talk about without searching online?

A study conducted by Wandera fortified Facebook’s claim. In the study, two rooms were set up with phones in them, one playing an animal ad and the other having no noise. Wandera found “nothing to suggest our phones are activating the microphone or transferring data in response to sound…We did not see any pet food ads showing up after the tests.” So we should be able to relax now, knowing our phones do not listen to us, right?

We may not understand the extent of what our phones know about us.”

According to Clay Miller, a chief technology officer, it might not be that simple. We may not understand the extent of what our phones know about us. Miller says that “companies like Google combine data from their many free apps, creating a profile for ad targeting purposes.” Miller claims that Google search, Maps, and even your Gmail connect to each other. While our phones may not be listening to us, Gizmodo reported in their study with Northeastern University, “apps were found to be ‘recording the phone’s screen and sending that information out to third parties.”

We should be careful, as new technology can “detail what people watch by identifying audio signals in TV ads and shows, sometimes even matching that information with the places people visit and the movies they see,” the Times explained. “The information can then be used to target ads more precisely and to try to analyze things like which ads prompted a person to go to a car dealership.” This new development makes many assumptions more realistic.

the next time you want to have a private conversation, it’s probably a good idea to leave your smart devices in another room so they can’t hear you.”

Even with this mixed bag of reviews on whether our phones listen to us, we need to accept that our phones have access to more than we realize. We carry these mobile devices everywhere, so should it surprise us how much they know?

Experts recommend updating your privacy settings, and according to Theresa Payton, former White House chief information officer, “look up how to access the recordings on file for each of the devices you use and request that they are removed.” By doing this, you’ll work to eliminate what your phone can access. Keep in mind though, that Zohar Pinhasi, a cybersecurity expert recommends:  “the next time you want to have a private conversation, it’s probably a good idea to leave your smart devices in another room so they can’t hear you.”