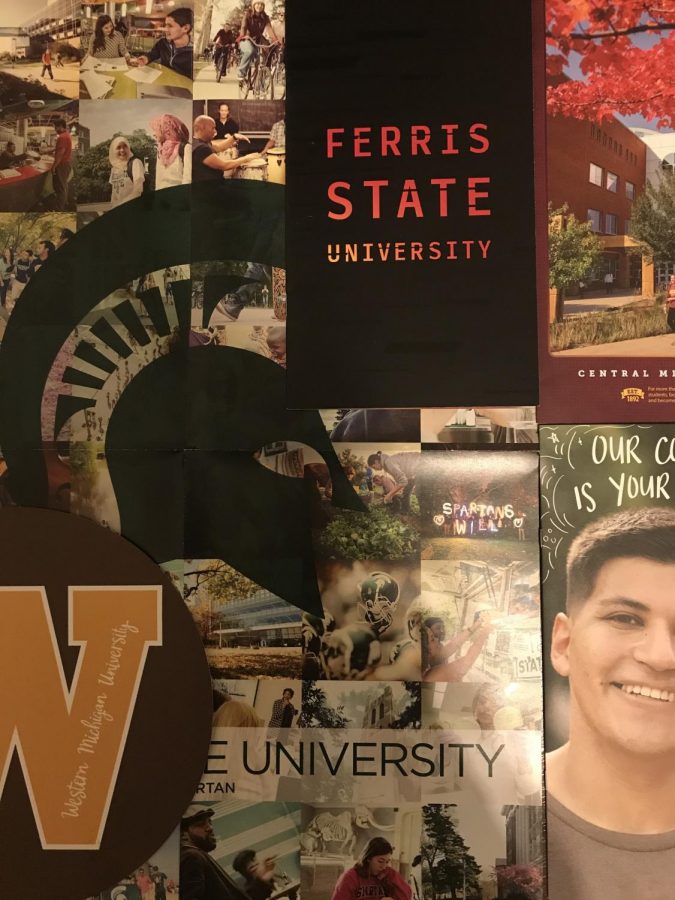 With the juniors taking the PSAT and freshmen and sophomores working on test prep the school had to find a way to have the seniors show up to school and still be useful. The school decided that a college fair for the seniors where they can sign up for five different sessions to learn about different colleges.

The counselors sent out an email to all the seniors to have them pick out what sessions they wanted to attend.  There were multiple colleges from Michigan like Central Michigan, University of Michigan, State of Michigan, and Grand Valley. Lake Michigan even had its own session that students could attend.

On October 16 the seniors reported to the school auditorium before 8 a.m. for the introduction.  First, seniors grabbed the schedules that would tell them what order to attend the sessions.

The introduction consisted of a general overview of the day. Also, how critical it was to attend your sessions in the order your schedule had since some colleges were there for a few sessions. Counselors explained that each college would have a stamp to show that you attended their session. At the end of the fair, seniors would have to turn in their schedules for attendance purposes.

After the introduction, the seniors left the auditorium to attend their sessions. The colleges took over rooms in the 200 wing, library, and auditorium. Each session lasted roughly 30 minutes. In the sessions the colleges would go over the aspects of their campuses, scholarships, and student life. Many colleges stated they had a deadline of November 1 for early admission. The sessions could range from having fifteen students to having only five.

After the sixth and final session, all the seniors reported back to the auditorium. They handed in their schedules and settled back into seats. The counselors talked about how seniors should start their applications. They mentioned how many schools require students to fill out the FAFSA and how if seniors have not already started filling it out that they should as soon as possible. They also stressed how important it is to check school emails often for important college information. Then they released the seniors to lunch or to class.

The counselors tried their hardest to provide a useful experience for the seniors. The goal was to help seniors make their decisions about what colleges they want to attend. For some seniors, it came too late. “Honestly for me, it was not [useful] because I already put down a deposit down on a college and I’m already like figured everything out so honestly not really. It helped some people but not me.”- Micah Zondervan, Senior. Also, multiple seniors did not actually show up for the first half of the day, skipping the college fair. Creating the question of if the college fair was useful.

“I don’t think so because some kids already had a school picked out. And then there’s no good representation in the first place of schools that a lot of kids wanted like Michigan Tech or Ohio State. And then a majority of kids didn’t even show up so it is not a good way to have seniors show up since they didn’t anyway.”- Niah Tovar, Senior.