The marching band fires up the football game

Coming together for fun, music and football at Jenison High. 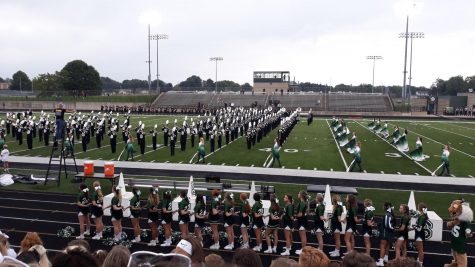 In occasion of the first Varsity first Home Football Game, on Friday 9/06/2019 the Jenison marching band played in the David McKenzie Stadium, making the game an incredible experience this year as well.

This exhibition gathered once again many people, not just from our school but from all Jenison. It pointed out the strong bond of our community; human beings coming together for sport, music, having a great time.

As a matter of fact, the marching band exhibition fired up the match, creating a positive and adrenaline-filled atmosphere.

The band played several songs; “There are some pieces we play every year, especially our fight song and of course The Star-Spangled Banner” as Mr. Zamborsky (Director of bands) said.

— “It includes some pretty technically challenging material for most of our musicians. The tempo is fast and there are passages with lots of rapid notes and difficult articulation.”

The exhibition is the result of a long and dedicated work, coming from both the director and the musicians. In fact, they had to come together several times to practice different pieces. Mr. Zamborsky told me that the marching band worked on this project almost all summer, putting in about 130 hours of rehearsal time. Mia Brown -clarinet-player in the marching band-  explained to me how, along with the school practices (about 1 hour every school-day and for 9-11 hours on Saturdays), the musicians also practice on their own.

According to Mr. Zamborsky, the piece the musicians struggled the most with is “Head Rush” (by Jay Bocook). “It includes some pretty technically challenging material for most of our musicians. The tempo is fast and there are passages with lots of rapid notes and difficult articulation.” This is not all though. “It’s also challenging to keep the music precisely together because the students are very spread out on the field.”

On the stocks: the band annual theme

The marching band takes part in many activities and events. In addition, the theme that the band chose for this year concerns Urban Canvas which is about the three parts of street art. “The 1st is about tagging and graffiti, the 2nd is about street art as social commentary, and the 3rd is about urban murals,” Mr. Zamborsky explained to me.

Even if the songs that were chosen for this year do not have a direct connection with street art, they manage to represent through their notes what the marching band works for and believe in.

Looking to the future

Even though there are some traditional pieces, the band wants to explore new frontiers.  Mr. Zamborsky talked to me about the band’s work on the third and final piece of the show. “It’s called Turbine by John Mackey and is very fast and aggressive.”

Eventually, the public reaction proved the great success of the exhibition which was of course accompanied by the color guards. As Mia Brown said, “It’s cool how much people like marching band these days, it’s really surprising sometimes!”